We took Kate to our community clubhouse on Saturday to see Santa.  She didn't cry... but she definitely wasn't too sure about him either.  I tried talking to her and telling her it was ok.  I think she believed me, but she still wasn't going to smile- even when Daddy and I joined her  :) 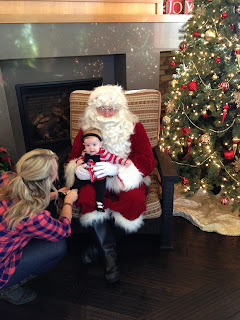 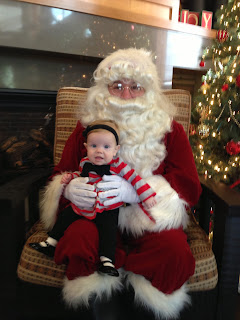 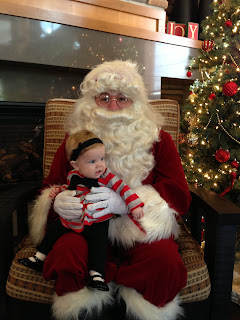 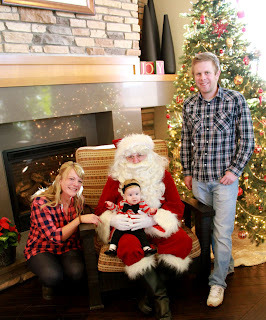 We had a wonderful Thanksgiving with my family in Indiana!  Kate did awesome on the long road trip and was a trooper while we were there, even though she got sick the last couple days . :(  But with plenty of arms there to cuddle and love on her, she did great.

Thursday was a very full day, with lots of people to see and lots of food to eat - the perfect kind of day.


Friday meant early morning shopping for us 4 sisters!  Which combines my 3 best friends, little sleep, lots of caffeine, tons of laughing, big crowds, great deals... equals the best fun ever.  A huge thank you to the awesome dads who stayed home with our kiddos!!
(I have no pictures of our sister shopping time - which is probably for the best.  It gets a little crazy at times...)


On Saturday, we celebrated "Christmas" since most this side of the family wouldn't be together for it.  Here's our annual Christmas picture... look at alllll these kids :)  luv 'em to pieces 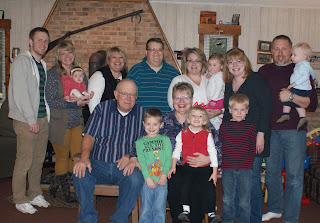 And of course, it was time for gifts!  It was Kate's first experience unwrapping gifts... that coupled with not feeling good, meant she just kinda sat there  :)  but it was super fun for the rest of us 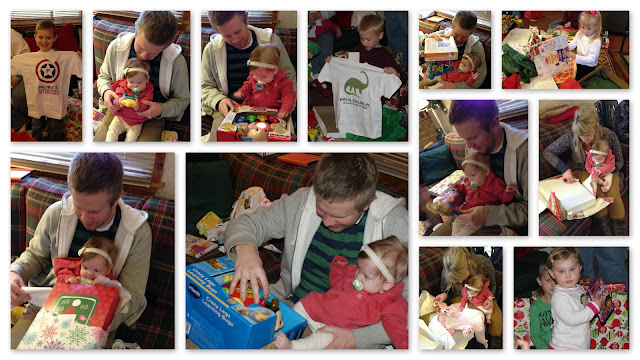 Sunday, we went to our home church... which is always so great to be able to see old friends.  Then it was a quick lunch at Five Guys before we got on the road again.

Sooo much fun!  Hope you all had a wonderful Thanksgiving with those you love too!
Posted by Kelly at 6:10 PM No comments:

Lots of changes this past month!  Kate seems like a little person now, with such a personality.  We just love it  :) 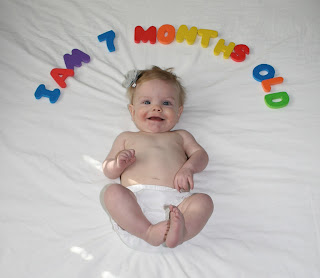 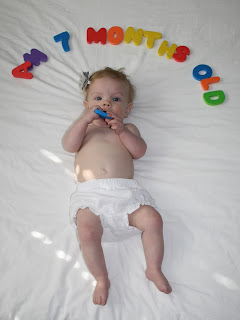 And here's a little hello from Johnny Appleseed.... 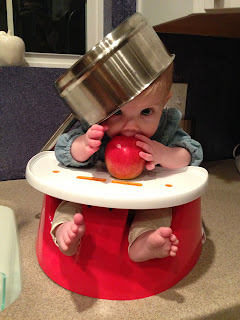 So I gave homemade baby food a try.  Don't be impressed though...I'm definitely not the all-organic, strictly homemade food kind of mom.  I just happened to have some leftover sweet potatoes - and I hate throwing food out  :)

Where did November go?!  I realized all the sudden I hadn't posted pictures in weeks.  It was a busy, but fun month.  Here's what it looked like for Kate!

I saw this commercial and seriously thot this was a spoof... but nope.  These lovely items are truly for sale, and I'm sure there are truly people that have bought them.

Half a year - oh.my.goodness!  For the most part it seems to have flown by... but I'm also trying to slow down and enjoy each step along the way.  I sure love being this little girl's momma. 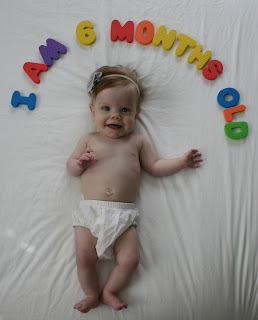 AND A HAPPY FALL TO EVERYONE FROM THIS LIL PUMPKIN! 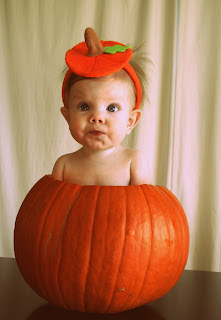 So we got this awesome duck/chick (ummm I don't really know which one it is) costume from my friend Michele, who used it for her little boy years ago.  It was perfect because I didn't want to spend a lot of money on one... Kate's so young and we aren't really into Halloween anyway.  But we put this on her and it fit perfectly!  What a happy duck/chick  :) 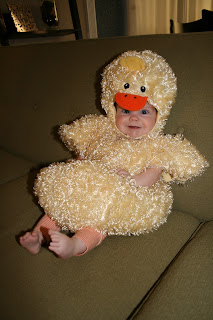 Our first stop was the clubhouse in our neighborhood.  The ladies who work there are so great - we love them!  Miss Laura was there to greet us with hot apple cider and of course, candy. 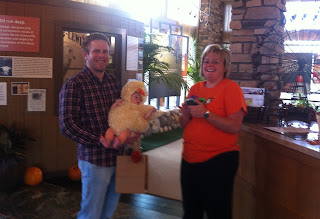 Then we passed by our friends/neighbors outside... cutie Liam was a Bronco football player and his sweet little brother Landry, was a football  :)  It was pretty chilly out, so they were all bundled up! 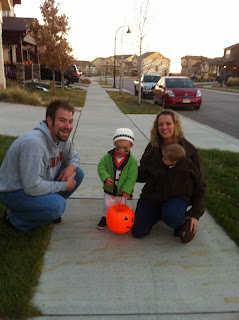 Next stop was to our friend's Kelly & Beto - and their precious, tiny dog Francine  :)  Neither Kate nor Francine quite knew what to do with each other. 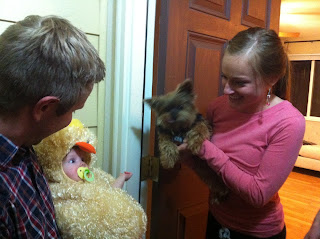 Then our final stop was at John's grandpa's house, where Great-Grandpa had been patiently waiting to see Kate. 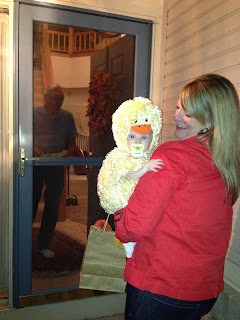 He had plenty of candy waiting for us... of course Kate was more interested in the paper towel lining his candy basket. 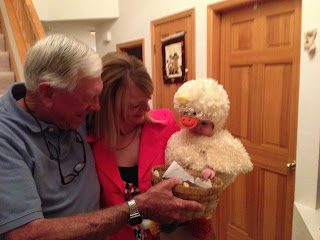 And shortly after, this duck/chick was ready for bed.  It was such a fun night!
Posted by Kelly at 9:50 PM No comments:

A great start to my day with a happy little girl... 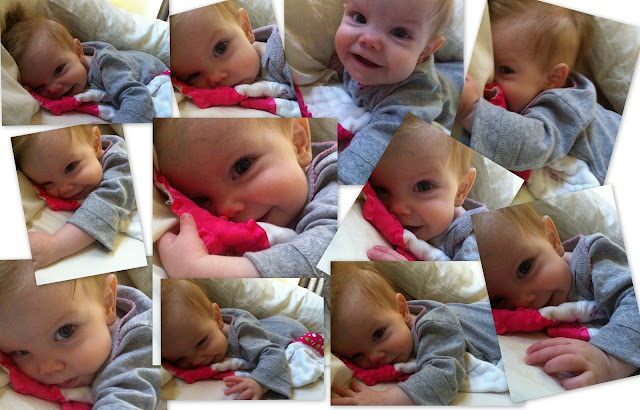 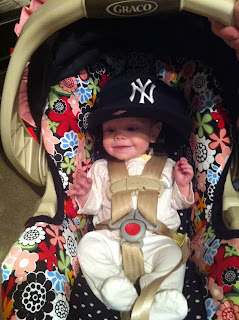 Jim Gaffigan is a favorite comedian of ours, and a few weeks ago I decided to see if he was touring anywhere near us.  Turns out he was performing in Denver on John's birthday weekend!  I scored some great tickets and told John I was planning a surprise evening.

We got in the car Saturday night and I told him to drive north on the highway... and as we approached Denver, directed him to downtown.  We parked and then I walked him over to H&M - a fabulously cheap, trendy clothing store that's new to Denver.  John got some smokin hot clothes (both because of their price, and because of how good he looks in them).  :)  I'd like to point out that I was successful in making this stop strictly for John... I didn't look at/buy anything for myself!


Next up I took him to a great little restaurant that I had found on Diners, Drive-Ins and Dives - family owned and operated, Sam's No. 3 diner.  We both got yummy, greasy cheeseburgers... fries were my side, and a little crock of mac & cheese was John's.  (How can you not love a place that offers a mac&cheese crock as a side??)  And then John FORCED me to share a chocolate shake with him.  [John: You wanna split a chocolate shake?  Me: Yep.]

Then it was time for the show!  I walked us over to the theater... and luckily we didn't see any signage outside, so John still had no clue what we were doing.

The show was ABSOLUTELY hysterical - we loved it.  He did a bunch of new material, and then closed with some of his prior stuff:  bacon... hot pockets... McDonalds.  (Have you heard him talk about the bonus fry at the bottom of your McDonalds bag?  Oh.my.gosh.  Kills me.)

Such a fun night celebrating my amazing hubby.  Love you so much, babe!
Posted by Kelly at 3:08 PM No comments: