My blog is becoming an opportune place for me to shameless plug my family! Oh well - I don't mind at all. Especially today, because I really believe in this plug.

My uncle has a fantastic blog that I'd love you to check out - especially if you're in any sort of church ministry. Dave has been a small groups pastor for Willow Creek church in Chicago. He has a huge passion for community... he loves to see people in and outside of the church, connected and cared for.

Dave was recently laid off, along with many others at the church, due to economic issues. What's been so challenging to me is his outlook and attitude through all of this. He chooses to not only trust God in this season (which is hard enough to do), but to also reach out and encourage others in the midst of it. Here's a post showing just that...

(Thank you for encouraging us, Uncle Dave. Love you!)
Posted by John and Kelly at 9:23 AM No comments:

Many of you already know about SafetySuit... Doug Brown's band (John's cousin) who was signed by Universal last year.  The guys have been touring this Spring with Three Doors Down, Seether and Hoobastank.  Their CD "Life Left to Go" is doing really well with hits like Someone Like You and Stay.  (If you haven't heard their stuff, GO RIGHT NOW to www.myspace.com/safetysuit!)
The band just released their second music video and I wanted to share it!  :D    I think it's incredible.  For real.  (The superhot chic in it is Doug's wife, Carmen - which makes me love it even more.)  Enjoy!

Posted by John and Kelly at 8:00 PM No comments:

Hope everyone had a wonderful Easter! Like any other holiday, it's such a great time to be with family and friends. And yet, unlike any other holiday, Easter is so full of rememberance for me. A Savior who was without sin, took on my sin and died for me... so that I could have abundant life. The picture of that is so expansive and yet so intimate, all at the same time. Where would I be without my Jesus... He's my everything.

So for the holiday, we drove to Kansas to be with John's family. On the drive there, we had rain and then snow for hours... oh so fun. Driving home, we had rain and then snow once we got home. Lovely! However, the weather while we were actually there was beautiful - so that's a plus! We had a such great time with everyone. The guys did plenty of golfing, which left us girls time for shopping, baking together and just plain catching up. 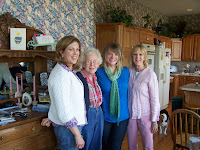 Just one of the girls! Me with John's Aunt Patti, Grandma and Mom


Got these pics from my sisters. Looks like the boys had a fabulous Easter too! Geez... the adorable-ness is overwhelming me :)

Paul and Emily with Mommy and Daddy - all ready for church. And Paul with his easter basket - look at that face!! 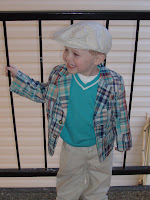 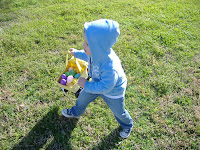 Padrick in his adorable easter outfit complete with newsie hat. Then he's off to hunt for eggs!
Posted by John and Kelly at 9:32 AM 1 comment: